On the occasion of Ragna Bley's exhibition "Serrated Tongues" at OSL Contemporary this Winter, the artist and writer Filipa Ramos were in conversation about the topics and obsessions that traversed this new body of work, Bley's recollections of her time in French Polynesia, their mutual love for literature and what the future will bring...

Filipa Ramos: I am fascinated by how your recent exhibition, "Serrated Tongues", starts with a beautiful quote and a poem, words accompanying your painting and sculpture. I am curious to know more about the title of the exhibition, which is at once so sensual and dangerous, and the poem that accompanies it.

Ragna Bley: I was reading Edward St Aubyn’s series Patrick Melrose while I was working on my own new series of works. Far from being thematically connected, it just seemed to resonate with me on so many levels. Patrick Melrose’s tone is dark and absurd but also humorous. I also think it has to do with the way St Aubyn handles the characters, which both encompass sympathy, pity, disgust and compassion. Since I had been looking at Gauguin paintings as a reference, when the line with Gauguins syphilitic twilight appeared in the reading, it was an image in words I immediately wanted to include.

Serrated Tongues for me was also immediate. Thinking of a serrated tongue gives me an almost visceral feeling, imagining the serrated edges in my mouth. In the quote, it refers to a cactus, but already in the next line a disease is mentioned, there is a jump there. There is something about a double meaning, a connection to language and to the body that resonated—or perhaps the way something is said in relation to what is said. And the shape of a tongue is used on land mass and many things, we all know what a tongue is.

The poem was a result of trying to make sense of these new paintings when I was making them. I didn't know how to deal with the fact that some of the works were inspired by the works of Gauguin. It felt like I was spiralling down this whirlpool of doubt and embarrassment, really. So I went back to look at the watercolours and spent time thinking about when I visited Tahiti a couple of years ago and sailed between Tahiti, Huahine and Taha'a. I imagined leaving a specific bay of Huahine, the yellow houses, the greens leaning over the water, seeing the sea getting darker and darker the further out we got. And I was imagining having a kind of conversation, perhaps with Gauguin, perhaps with someone like Thor Heyerdahl, or perhaps with myself. Perhaps a reflection of what it means to portray something or someone, what you take and what you leave in a place, what you bring, what you damage. I think it is also about desire. 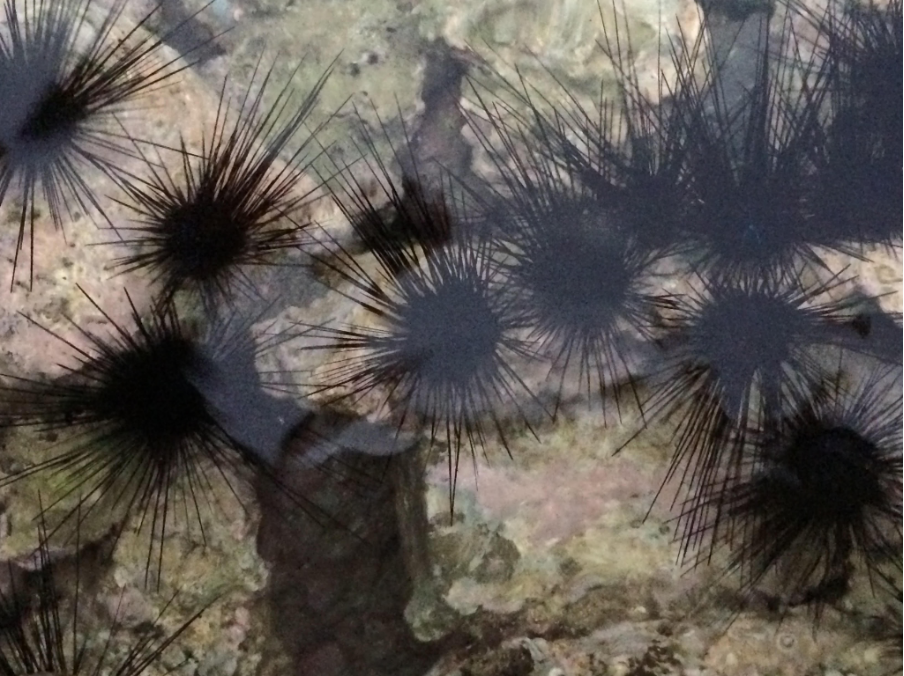 FR: Thank you for also including these urchins in your answer. They are so beautiful! Stars and dark matter at once! After what you said, I looked back at your paintings and the sensual softness that I generally associate with your pictoric work was replaced by a series of glimpses of angular sharp forms—blades, diamonds, serpent mouths, broken shells—which seem to be cutting through the smoother matters. This perception made me curious of your working process. How intuitive or planned is it? Do you make preparative sketches of your paintings or do you let your perceptual and gestual impulses guide you through the making?

RB: The process is usually a negotiation between planned or controlled moves and chance. I often set up a framework that limits possibilities, this could be time limits, format, type of paint and canvas and a certain area of references, but then I want to have an openness in the process too. I never know or want to know exactly how the works are going to look like or be. For this series of works, I worked with sketches more than in some of my previous projects. This has partly to do with the technique, which only allows for one ”take”, all the paintings are made in one go. I made sketches to make sure I believed in the raw material, to make sure the colours and some of the shapes and composition were right. Still the sketches have to be kind of bad so there is enough room to expand, translate and mutate to the larger work.

When I thought I had a good starting point ready, after mixing and remixing paint, checking consistencies and having a setup for a sort of motif, I started to paint certain parts and others were left bare. I then poured paint and used large spatulas to drag the paint and to almost expose the painting. This last part is very intuitive and not planned at all—it is all about forgetting the first idea and any sketches and just focusing on what is happening on the painting. These works are quite technical on some level. The sharpness, I wonder if it is a consequence of working more closely to the representational and using preexisting shapes, I wonder if it is working against my instinct of letting shapes be more rounded or spherical… Perhaps edges get rounded somehow when you think of an object rather than seeing it in-front of you, I don’t know.

FR: You are right, memory blurs and softens images. What you were saying made me think of Uncle Alphonse, a character from WG Sebald’s novel Austerlitz (2001) who replaced the lenses of his spectacles with a thick grey layer of silk to perceive “the sudden incursion of unreality into the real world”. He was also attracted by the “phantom” traces left by moths, which somehow seems connected to me, moths making rough sketches of their profiles in the dark.

But this series of paintings still pursue your fascinating interest in colour, and they even assume brighter tones, different from the more pastel ones of some of your previous works. Considering how you also refer to Gauguin, who had such a characteristic colour palette, can you tell me more about the presence of colours in this show?

RB: That is a fantastic image! I found this quote, and especially like ”the sluggish reaction of the human eye”, ouch.

It haven't read Austerlitz (but, I will now!) but searching for it, and moths, I stumbled on a part on it by literature critic Anne Whitehead’s Trauma Fiction: “For Sebald, the moth in Austerlitz signifies the ’night side’ of the butterfly (2001b); if the butterfly, through its connection with Nabokov, represents the workings of memory, the moth forms its dark underside of traumatic forgetting”. Our dependence on images is just amazing, also in text, for understanding, making connections, making sense and compartmentalising abstract ideas or concepts and moving them around, restructuring things.

I guess one is searching for what is connecting to oneself. Nabokov has been important for me previously, mostly through the novel Darling River by the Swedish author Sara Stridsberg, which is a book written through the eyes of different variants of Lolita.

The question of colour is somehow endless. I think it had an impact on me while looking at specific paintings. Not because they necessarily are the same, but in the same way as going closer to a specific reference, the colours perhaps create different harmonies and discords. In general, I think a lot through colours—dates and numbers have colours and pain has colour. So in one way, colour for me is closely connected to sensing. I think the way I use and approach colour has evolved over the years, sometimes consciously but often unconsciously.

Talking about colour, I was recommended the book What Color Is the Sacred? by Michael Taussig, and I bought it but didn't open it until after I was done with the paintings for this exhibition. It felt like a revelation to read about different notions of colour, not as a neutral, but as connected to both bodily consciousness and as a cultural entity with all the historical significance and complications that follows. Taussig writes about how colour is connected to history and to colonial history. And it felt like an epiphany, but after reading a bit I also got annoyed. Which is probably only my reaction to writers having this smart tone or way of writing that appears untouchable. Colour is similar, I think, to other broad concepts, which most or all people have a relationship to: Love, Light, Death... The grandness is so close to the banal. Which I think leads to the need of entry-points of specificity or the company something like humour.

FR: I love how this answer takes you to many different places and references, from literature to anthropology and back, while the question of the slight change of colour palette in this exhibition never being really approached. Maybe it’s because you are still processing it and reflecting about the different elements that directly and indirectly influence your practice and artistic choices, or maybe it’s because it’s so challenging to talk about one’s works in an analytical way, as if a part of what you make is disassembled in the process of doing so.

And lingering with influences and references, I would love to know more about your boat trip to French Polynesia, which preceded the making of these works. What are the particular impressions, encounters, moments that come to your mind when you rethink it?

RB: I think you are right. I might not know or want to know (although you said it more elegantly). There is a need for a certain room for manoeuvring when it comes to talking about your process or work. And perhaps it is about not wanting to freeze or manifest certain things in words that appear to be in flux—between the incredibly mundane, unsexy work in the studio and instances or moments that feel transcendent, sublime even.

I made a lot of watercolours when I was in French Polynesia. And I made a series of works that was very closely inspired by the time spent there. These past months, I reflected on it again, after looking at the works by Gaugain. It was seven years ago I was there and there is an aspect of revisiting one's own stories, already created or told, but thinking about it I also discovered new memories. Imagining Huahine, Taha'a and Tahiti today, the following instances came to mind: